Bwindi National Park Massacre: Bwindi impenetrable national park located in the south western park of Uganda the pearl of Africa is one of the rich ecological systems in Africa. This wonderful tourist destination situated in Kanungu district has gained famous and ranked of the top national park in Uganda and Africa at large for being home to the highly endangered mountain gorillas. Mountain gorilla trekking in the deep forests of Bwindi impenetrable national park is the best experience you can get I the whole world as it takes you through the calm playful habituated mountain gorillas living in groups. 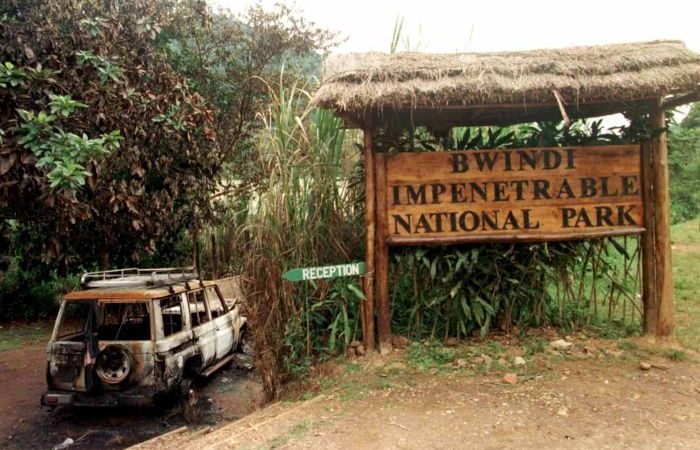 The Bwindi impenetrable national park massacre was carried out by the Rwandese Hutu rebels who are linked to being responsible for the Rwanda genocide of 1994. The Bwindi National Park massacre carried by these merciless rebels involved killing, kidnapping, and raping of tourists. The rebel attack was a surprise as it happened when the park authorities and tourists themselves were unaware and in a vulnerable state. Early in the morning at the break of the dawn tourists were woken up by loud gunshots and blasts by grenades as rebels emerged from the thick forests armed with axes, rifles, and machetes as it was stated by a 30-year-old Elizabeth Garland. The rebels attacked the camp and ambushed park’s armory stores stealing guns and rifles and later they set all cars to fire.

The incident was so horrifying to tourists and the world at large when it was reported. The massacre hit the climax when 31 tourists were kidnaped and taken in the arms of the rebels into Abercrombie and Kent encampment camps. While in these rebel hideouts the victims (tourists) faced torture, made to walk barefooted and all their valuables such as jewelry and money were taken by the rebel kidnappers. In the same incident, 8 tourists lost their lives, one of them was raped before being killed.

Among the tourists who lost their lives in the hands of the rebels include the 2 tourists from New Zealand, 2 United States of America, 4 from the United Kingdom and 4 of the were Uganda citizens. Some killed victims’ identities were Robert Haubner 48 and Susan Miller 42 who were American citizens who were newlyweds on their vacation in Africa. The couple were once in Africa on a trip and returned for the third time with some friends who were identified as executives from Intel Corporation a computer chip manufacturing company based in Oregon.

Among the killed tourists in the Bwindi National Park Massacre, were also Britain citizens like a 23-year-old recent graduate from Nottingham University Mark Lindgren who was a 3 months trip in Africa and Steven Roberts from Edinburgh. Many reports and statements were released by survivors and state administrators identifying the rebels as Rwandese Hutus who were responsible for the 1994 Rwanda genocide and they fled into the forests of Uganda through the borders of Rwanda and the Democratic Republic of Congo. In the forests where they camped these people reorganized themselves and later attacking Bwindi impenetrable national park.

This attack was an act of revenge to three nations of Uganda, the United States of America and Britain for their support to the Tutsi minority during the Rwanda genocide over the majority of Hutus. This explains why they majorly kidnapped and killed citizens from these nations as evidenced by a statement made by Hussein Kivumbi manager of one of the five camps. Rebels left notes on killed bodies stating that “we are not happy with Americans and British we don’t want you in our land, you support our enemy Museveni” and also Anne Pelter a French deputy ambassador one of the survivors says she was told by the kidnappers that they were not happy with support of Museveni, America and Britain’s support to the Tutsi minority over them the Hutus majority. This explains why while kidnaping the rebels handpicked Americans, Ugandan and Britons which is deeply stated by one manager of the five camps Hussein Kivumbi.

The Bwindi National Park massacre was classified as one of the most outrageous actions to be carried out on innocent people which lead to nations that is Uganda, Britain and the United States of America to join forces to combat such actions. Some individuals responsible for the attack were caught and jailed for example Paul Bizimana a former Interahamwe rebel leader.