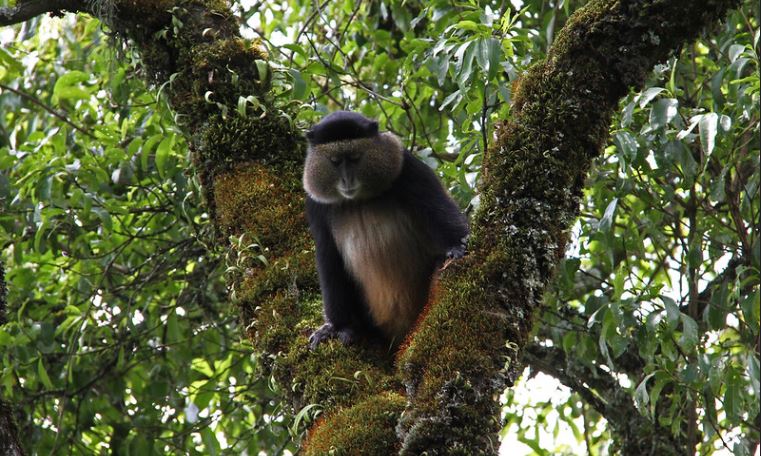 A golden monkey permit in both destinations is valid for one day and allows you to spend one hour in the presence of the golden monkeys as you watch them jumping around in the trees, playing, feeding among others and it also includes the park entrance fee and the services of a park guide.
How to book a Golden monkey trekking permit
Golden monkey trekking permit can either be booked directly from Uganda Wildlife Authority a tourism body in Uganda or Rwanda Development Board a tourism body in Rwanda. The permits can also be booked via a tour company like Achieve Global Safaris which will save you all the hustle. While booking through a tour company you will contact us with the dates, month and year when you want to participate in golden monkey trekking and will check out the availability of the permits and get back to you. You will make a deposit for the permit and also send your pass port details which will be used to acquire a permit and we will purchase a permit for you.
Booking via Achieve Global Safaris is the best option because we will organize your entire safari which includes the golden monkey trekking permit, transportation, accommodation and other activities you can participate in on your safari in Mgahinga gorilla national park in Uganda or Volcanoes national park in Rwanda.

Though a golden monkey trekking permit in Mgahinga gorilla national park can be booked on ground, it’s advisable to book 3 months in advance before the trekking date because sometimes they are competitive and get sold out like during the peak season in the months of June to August and December to February.
Best time to go for Golden monkey trekking safari
Golden monkey trekking can be done anytime throughout the year though the best time is during the dry season in the months of June to August and December to February. During this period there is less rainfall in the forests which makes accessibility to the national parks easy and forest trails passable compared to the wet season when there is heavy rainfall which makes the trails muddy and slippery.
What to carry for your Golden monkey trekking safari
• Golden monkey trekking permit, this allows you to trek a habituated golden monkey family therefore without a permit you will not be allowed to trek the golden monkeys in any national park.
• Long sleeved trousers and shirt, the long sleeved clothes will protect you from insects and also protect your body from getting scratched due to thorny trees in the jungle.
• Garden gloves, the garden gloves will protect your hands from germs, mud, getting scratched among others because due to steep slopes you will be supporting yourself therefore the gloves will be of much help.
• Hat and sunglasses, these will protect you from direct heat which comes from the sun especially during the dry season.
• Hiking shoes, the hiking shoes should be comfortable and reach up to your ankles so as to keep your feet dry.
• Waterproof jacket, this will protect from rain because it can rain anytime in Mgahinga gorilla national park and Volcanoes national park regardless of the season.
• Warm sweater, the sweater will give you warmth especially during morning and night hours.
• Camera and extra batteries, the camera will be used to take plenty of pictures and record videos on your safari during the one hour with the golden monkeys in their natural habitat.
• A pair of binoculars, binoculars will be used to spot the golden monkeys and bird species from a far because both destinations are ideal places for bird watching.
• Energy snacks, the snacks will give you strength and also keep you hydrated during trekking.
• Insect repellent, this will protect you from insect bites such as mosquitos, tsetse flies among others.
• Waterproof backpack, this will be used to carry all your golden monkey trekking essentials such as energy snacks, insect repellent, permit, camera, binoculars among others.
• Walking stick which will give you support during hiking in the jungle
• Hiring a porter to carry your backpack and also give you a pull or a push in steep areas which can be muddy and slippery.
Golden monkey trekking is an exceptional activity in Mgahinga gorilla national park and Volcanoes national park which will give you breathtaking and lifetime experiences on your safari and can also be combined with other adventurous activities like gorilla trekking, nature walk, birding, culture encounter among others to make your safari extra ordinary.