Kibuli Hill: More To The Mosque And Scenery 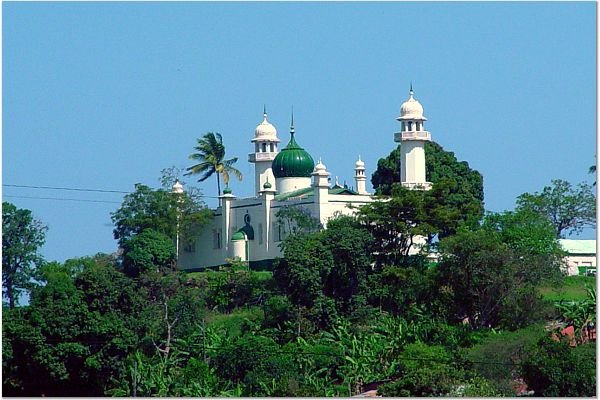 Kibuli Hill: More To The Mosque And Scenery : Erected on one of the historical seven major hills of Kampala, is a magnificent gem overlooking down town. Kibuli mosque is one of the often ignored attractions even on a city tour perched up on the Kibuli hill. However it is the home of the Muslims in Uganda and its history and administration are coterminous to the history of the city and Uganda.

The smaller sized lustrous and attractive white mosque is encircled in the tranquility of the palm trees making it an ideal city must visit spot. Like all the major hills of Kampala, Kibuli is no exception to the fact that it holds major landmarks like the Kibuli mosque the centre for Islamic faith, police training school, a nursing school, prestigious primary and secondary school, Islamic university of Uganda, a notable hospital and a teacher’s training school. Further up in the minaret of the mosque are glorious views of the city that you cannot afford to miss for anything.

The land on which Kibuli and its projects stands today were donated by Prince Nuhu Mbogo a Buganda royal who had received it from the British colonialist for his collaboration. The land was initially intended for his palace but on one of his expeditions to the top of the hills he decided that the place was more suitable for the house of Allah than his residence. He then built his house downhill and built the first mosque here on top of Kibuli hill in 1892. His son Prince Badru Nakibinge also a British collaborator too donated an extra 80 acres to accommodate the hospital and institute.

The help and support of the Aga Khan , on one of their visits to Uganda, saw the completion of the mosque in 1951 and was hence forth open for prayers to the Muslim community. The Aga Khan made a generous donation and also launched a shilling for a shilling campaign that saw the erection of the prestigious Kibuli mosque which has until now has been the major mosque in the country over the years. Since then the mosque has seen visits from number of dignitaries Muslim and non Muslim alike such as the Grandson of prince Mbogo: Kassim Nakibinge, different presidents from Iran, Sudan, Tanzania, Zambia, Ugandan presidents, Kabakas, the king of Saudi Arabia, Aga Khan and many more.

Many Muslims believe a wedding that is not at Kibuli mosque is no wedding, little wonder most notable wedding even for prominent Muslim people happen here.  The hill now awaits a visit from you and is open to visitors in between prayer times: 8am-12pm, 2-4pm, and 5-7pm. This is to avoid interruption of prayers, and if you are a Muslim you could join in and pray at the historical Kibuli mosque. Do not forget to carry your camera to and also checkout the giant mango tree that stands in front of the mosque. It is way older than the mosque and stands as a historical figure as several meeting for the planning and building of the mosque was held here.