Kidepo Valley National Park is a gem of nature set in a frontier of wilderness within the virgin countrysides of the pearl of Africa, Uganda. Kidepo national park is one of the “not famous” protected areas in Uganda. It is a secret of nature with a lot of undiscovered beauty of mother nature of flaunted in different living species. Kidepo national park is blessed with over 80 species of mammalian animals and about 500 species of birds, some of which are endemic.

The size and beauty of nature and wildlife in kidepo national park is, perhaps, the reason as to why is called the park at a glance found in Kabong district near the Karenga in the uppermost northeastern corner of Uganda, which is the northeastern region. Kidepo national park is set on on a relatively large area, about 1442 sq.km which is approximately 540sq.miles. The national park’s terrain is rugged and dominated by a wide savannah. The park area also exhibits one erect mount morungole and two wide river valleys, Norus and Kidepo. 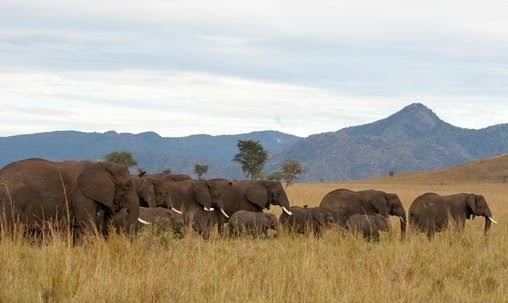 Kidepo valley was gazetted in 1962 as a national park after the independence of Uganda, and it is now under the watch care of Uganda Wild Authority (UWA) a government organ in charge of all protected areas in Uganda. Before the park was gazzated in 1958, by the British colonial administration, as a game reserve, the Kitebo or mening were the first inhabitants of the area. They lived in harmony from 1800 with in area which is now kidepo valley national park. They practiced farming and carried out hunting from within the savannahs of the area.

The main aim for gazetting kidepo national park was majorly to provide protection to the wild animals which, during the time, were being hunted to extinction by the inhabitants of the area by the Kitebo and the mening people. Another reason for gazetting kidepo national park was in line with the act of the government put up to prevent bush burning which was done by the pastoralists as a measure of chasing tsetse flies from the grazing area for their beloved cattle.

Getting to Kidepo Valley National Park

Kidepo national park derives its name from the wide kidepo valley. From the local language of the Karamojong people, kidepo means to pick up or gather. Kidepo valley is dominated by a number of Borassus palm trees which are a delicacy for the elephants who dwell near and around the national park. Therefore, a lot of people used to come to the valley to pick up the fruits, and thus the name, kidepo.

Wildlife of kidepo valley national park: Despite the remoteness of kidepo valley national park, it is one of the best and finest magical wild places that Uganda can boast about. It is a vast area of savannah stretching from the center of the park, Aapoka, through the magical flat plains which are girded with a horizon of distant hilly outliers of northeastern Uganda.

Kidepo valley national park shelters over 80 species of mammals, of which 28 are endemic and only found with in the northeastern region of Uganda. The valleys of kidepo valley national park harbor over 470 bird species some of which are special and rare species in Uganda. Kidepo national park is characterized by unique and special wildlife which dwells in the flat terrain of undulating hills of the land such as the cheetahs, jackals, bat-eared foxes, hyenas, giraffes, Burchell’s zebras, lions, leopards and carcals among others.

Birding in kidepo  park is an opportunity to see birds like ostriches which is the biggest bird in Uganda, and prey birds such as vultures. Apoka rest camp is the best area for bird watching, for example, the silver birds, yellow-billed shrike, the Nubian woodpecker plus the endemic red-cheeked cardon among others. Despite the great depopulation of animals in kidepo national park that resulted from the 1980s- 1990s warfare in northern Uganda, the wild population in kidepo national park is bouncing back over time, basing on the statistics from the Uganda Wildlife Authority, and this is the resilience of nature.

The Karamojong people are the most known to be living in the northeastern region along with other inferior local communities in kidepo national park. However, most of the tribes in the area are pastoralists whose livelihood depends on their cattle; they exploit their cattle in all terms of surviving and living.

The “Ik” tribe makes up the smallest ethnic group on the African continent. The ik people are threatened of their existence and the people cannot be known easily, since, the tribe walks under the shadow of the famous Karamojong people. The ik are not pastoralists which distinguishes them from the Karamojong people. They are majorly hunter-gatherers and their survival is the prey hunt. The ik people also speak a very unique language, believed to be similar to some other language of the tribes in Egypt; this factor makes them be important to archeological findings that are still under research.