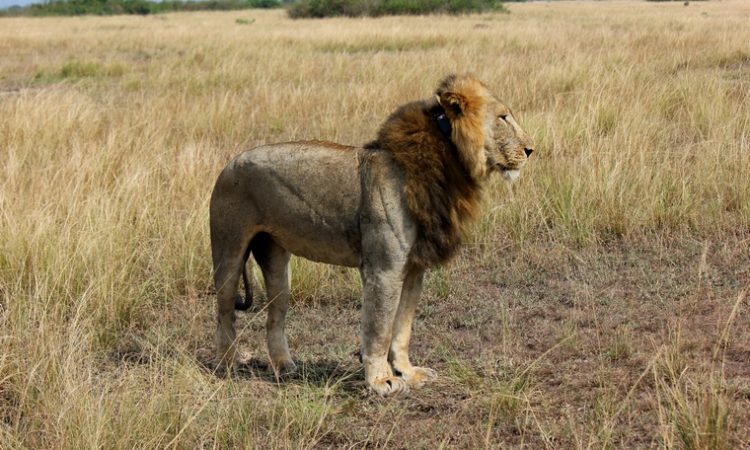 Lion tracking is an interesting experimental research-based activity in Queen Elizabeth national park where you will be able to track the lions in their natural habitat and also get an opportunity to learn more about their social habits, feeding habits, enjoy the juvenile cubs playing with each other among others.

Lion tracking in Uganda is only carried out in Queen Elizabeth national park in Kasenyi plains where you will also be able to view other animals such as elephants, buffaloes, leopards, giant forest hogs, warthogs, bushbucks, waterbucks, bird species like black-bellied bustard, lapwings, crowned plover, African jacana, purple heron, ground hornbill, western yellow wagtail among others.

Lion research tracking in Queen Elizabeth national park is managed by Uganda Carnivore Project in collaboration with Uganda Wildlife Authority where they make research on the lions and other carnivore animals such as the hyenas, leopards among others so as to monitor their behaviors and movements within the park so as to map out their territories which helps the park rangers to know when the lions are sick or in danger especially when they get close to the villages where they are at a risk of being shot by some villagers. The Uganda Carnivore Project also aims at educating the local people on how they can live in harmony with lions and educate them about sustainable economic development through participation in ecotourism activities.

How Lion Research Tracking is done

Lion tracking is done in Kasenyi plains which harbor large numbers of lions and it’s carried out by visitors accompanied by a researcher who uses a directional antenna that can be held out of the window in a safari vehicle to trace lions with radio collars attached to them. The directional antenna detects the lions with radio collars and once a lion passes by the antenna is automatically alerted and the visitors will follow its movement until it’s spotted. During lion research tracking visitors and the researchers are allowed to go off track and get close to the lions wherever they will be hiding and this gives visitors an opportunity to take clear photos.

Lion tracking experience allows a limited small number of people so as to ensure accurate research results without congestion and not stressing or disrupting the animals because congestion makes them to behave wildly. If it’s a small number of visitors it will give them enough space for photos, recording videos and also understand more about the lions in their natural habitat.

A lion research tracking permit in Queen Elizabeth national park costs $60 per person for Foreign Non-Residents and UGX 100,000 for East African residents and the fee excludes the park entrance fees. $10 of the money collected from the lion research track is given to Uganda Carnivore Project to ensure the continued conservation of the carnivores or lions.

When to book for Lion Research Tracking activity

Lion tracking activity should be booked in advance because the activity allows a limited small number of people and is on high demand since every visitor on a safari in Queen Elizabeth national park wants to see lions at a close range and also learn more about their habits and behaviors.

Lion tracking permits can be booked through contacting the park headquarters directly by email or telephone calls on the date when you want to engage in lion tracking. Lion research tracking permits can also be booked through a trusted tour operator like Achieve Global Safaris which offers incredible and adventurous safaris in Uganda and other destinations like Rwanda, Congo, Kenya, and Tanzania. This is the best option in that the tour company will notify Uganda Wildlife Authority park offices on the dates when you want to track the lions. Achieve Global Safaris will also plan other activities you can engage in while in Queen Elizabeth national park, plan your accommodation, transportation, meals among others.

When to do Lion Research Tracking

Lion research tracking in Queen Elizabeth national park can be done anytime throughout the year. Lion research tracking can be conducted twice a day that is in the morning at 8:00 am and early evening at around 4:00 pm and the experience takes about 2 to 3 hours. During lion research tracking you will be able to see the lions as they roar, mark their territories by scratching the ground with hind feet, watch juveniles play with each other, get a close and clear view of the lions among others. Since lion tracking will be done in Kasenyi plains you will also be able to view various bird and animal species such as the leopards, elephants, waterbucks, Uganda kobs, bushbucks, leopards, buffaloes and many others hence making your safari unforgettable.

Lion research tracking in Queen Elizabeth national park is a must-do activity for visitors who want to learn more about the lions, explore and get lifetime experiences on their safari in Uganda.