Visit Uganda  : Uganda famously known as the Pearl of Africa due to lot of features that makes it   so famous Uganda such as the bio-diversity of wildlife, vegetation, tree species, bird species, conducive climate and beautiful nature. To most of visitors who visits Uganda on safari to explore the diversity of wildlife meaning, on visit here you will have at least a night in Uganda’s Kampala capital or in the jungle if you visited on Uganda’s safari. Note, Uganda’s national park boosts with perfect and comfortable accommodation unit that ranges between luxury –Mid-range and Budget. 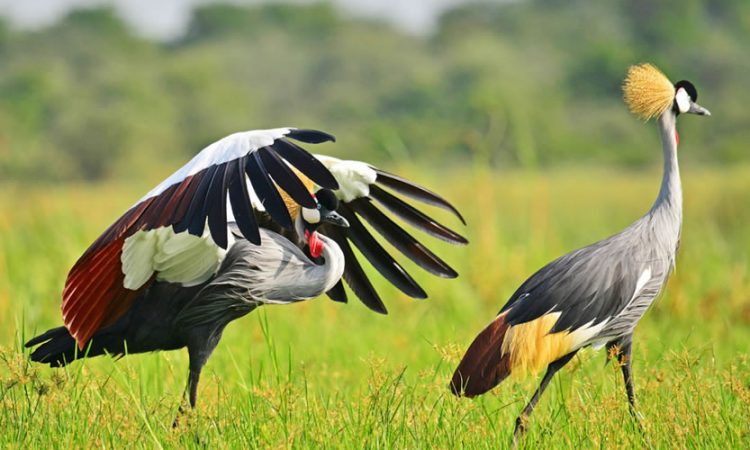 Meanwhile, Kampala city has a warm climate that features two annual seasons dry and wet seasons, though it does not experience wet seasonal months which usually falls from August to December and February to June. The most interrupting months with heavy rainfall starts from the month of February to June and   April is the heaviest months   with average of about 169 millimeters.

The drier months happens from June to September and December to February. More so, Kampala receive moderate rainfall that appears during night and day time, when the sun comes out and life goes on. In other words, Uganda has a normal temperature that ranges between 25 to 29 degree Celsius.

Below are the certain reasons as to why you should visit Uganda to your next move or Uganda safari to Africa because Uganda is a beautiful country;

Visit Uganda famously known as the hospitable country in the world meaning people who live in Uganda are the most welcoming and peaceful people as they show their faces filled with joy and smile, smile is warm as their sun as it is said over and again that Ugandans are the friendliest people in Africa thus leading to number of tourists to increase day by day in the country, just because are so welcoming about their visitors and also to their home regions.

Uganda is surrounded by water bodies of Lake Victoria and other small lakes in it, located in East Central Africa bordered by Kenya in East, South Sudan in the north, Democratic Republic of Congo in the west, Rwanda in the south-west and Tanzania in the south. More so, it lies within the Nile basin that varies at a modified equatorial climate. Uganda’s official language spoken is English and Swahili and country’s mother tongue language is Luganda since Uganda consists of very many regions with several different languages spoken including; Lusoga in the Eastern region, Luo in the northern region, Runyoro, Runyankole, Langi among others.

The fact is that, Uganda gained its independence on 9th October in 1962 after the British protectorate and ruled by His excellent Yoweri Kaguta Museveni who went on to the power in 1986 up to date.

In general, Uganda is a blessed destination with lots of attractions, beautiful nature and with bucket of activities which can be done in different safari location with in athe country. Above all visit Uganda and adventure into its fabulous attractions of wildlife and also meet up the peaceful people friendly and welcoming;

The Ndere cultural center; This is one of the most amazing cultural site in Uganda which it can be visited in the evening times as you enjoy their impressive cultural performance at Ndere troupe culture center which began long time age in the area. This cultural center is good in performing traditional dance to the locals, wedding anniversary as well as acting as tourist attraction to tourists or to so ever visits this center. On your next visit to Uganda safari you can choose to combine visiting this center and be filled with lots of laughter’s as you can be amazed with best and unique tradition dance of western people as you will be served with a drink of wine as you enjoy the activity. More then, the Nyege –Nyege festival that takes place in the month of September near the sweat waters of the source of the Nile River, this festival is all about dancing, swimming, water river rafting and many more.  The Nyege –Nyege is quite amazing festival that attracts millions of people to join the event.

Visit Uganda and enjoy its beautiful culture touched with norms, customs and languages.

Visit Uganda and adventure into its stunning nature as it well known that Uganda boosts with lots of features that attracts numerous visitors who visits the country ,visit Uganda and explore the  majestically snowcapped Rwenzori mountains  with the  third highest peak in the Africa’’ Margarita peak’’ and good for the hiker adventurous ,tour Mount Elgon with the largest volcanic caldera in the world ,Lake Victoria –Africa’s largest lake acts as a tourist attraction to those  well pleased with beach holiday and more  interesting never  leave Uganda whether on holiday or safari without reaching to the Source of the Nile River a longest river in the world where you can do lots of activities..

Uganda museum is the national museum one of the oldest in East Africa and its permanent residence is in Kampala. The existence of this museum was to protect the historical nature and traditional cultural heritage of Uganda, among the displayed collection of spectrum to encounter on hunting equipment’s, music instruments, archaeology, weaponry and each of the displayed collection.

Visit Source of the Nile

It’s truly humbling to visit the source of the Nile River famously known as the world’s longest River where you can engage in activities like water rafting, sport fishing, bungee jumping among others.

Uganda is a well pleasing location to visit due to its welcoming people who live in peace and harmony .However ,during your long visit  here ,you shouldn’t get worried of where to stay because the country comprises of  thousands of hotels both in central and other regions within .Accommodations units ranges between luxury ,Mid-range and Budget with quality amenities and professional chefs  who knows to prepare delicious food .Such hotels include ;Kampala Serene Hotel ,Ntinda view apartment ,Speke hotel ,Crater safari lodge ,Lake view Resort hotel ,Hotel Sojovalo ,Grand global hotel ,Pearl of Africa Hotel among others .The city is good to stay in as it rewards with great view of the city and the rolling hills since Kampala is a city of seven hills.

Ngamba Island is unique place for viewing chimpanzee apes in their well fenced area. The area is located on Lake Victoria where you need a boat to access you to the Island.

Activities to do in the park include; Game drive, nature walk, chimpanzee tracking in Budongo, hiking to the top of the falls.

Kidepo Valley national park; The park is the world’s untouched safari destination, located in the northwestern region on an area covering 1442 square kilometers. Kidepo boosts with 86 mammals such as spotted hynes, fox Kestrel, zebras, African buffaloes among others and over 500 bird species

Kibale national park boosts with over 1500 wild chimpanzees with other small primates such as blue monkeys ,white and black colobus monkeys ,Red monkeys and many more .The park sits in the western region of Uganda  which was established in 1993 to inhabit the diverse population of  mammals ,birds ,butterflies ,13 primates on the land  measuring 795 square kilometers .The main activity to be encountered in this park is Chimpanzee trekking which can be done in kibale forest ,other activities include birding ,nature walk and many more.

The park is the smallest among Uganda’s national park and can be easily accessed by car which lies in the western region in kiruhura district of Uganda. Lake Mburo national park is the only game park in Uganda located close to Kampala city, approximately 240 kilometers by road in the west of Kampala to its main destination. The park was created to protect variety of mammals such as zebra, hippopotamus, impala, warthog, common eland, African buffalo, African leopard and over 300 bird species which inhabits in the savannah grass land and in 2005 it was considered as a lion conservation area. Activities done in here they include; wild life game drive, night game drive, bicycling safaris, Horseback Riding safaris, sport fishing, hiking.

This is one of the national park in East Africa which is considered to be having the 3rd highest peak famously known as margeherite peak which measures 5,109 meters high above the sea level .The park is located in the southwestern part of Uganda at the edge of Albertine rift valley bordered with four districts that is to say Kasese district ,Bundibugyo ,Kabarole and Ntoroko district ,which covers 996 square kilometers of its land with unique and wonderful activities you can participate in and these include; Mountain trekking ,bird watching ,culture encounter ,guided hiking  and many more.

Mount Elgon national park is situated in Eastern part of Uganda and it is famously known of having the highest peak ‘wagagai peak’ and it is close to sipi falls. Thing to done in mount Elgon and sipi falls; climbing mount Elgon, Rock painting, Biking Abseiling, Hiking, Rock climbing and also viewing of the falls.

Uganda’s national park are under management of Uganda wildlife Authority and are at the list of UNESCO world heritage site. They are safe with nice lodges located inside the promises of parks and beautiful hotels close to the parks.

Uganda is all year round visited destination comprising of two seasons dry and wet season though the best time is in dry season from June to September and December to February and the months to have is quite remarkable experience. But you can still visit the national parks or country in wet season, since Uganda has moderate rain falls that might fall during morning hours’ rain might fall and afternoon activities goes on.

Lastly, visit Uganda a truly humbling hospitable and welcoming destination with friendly people, a visit to Uganda is worth it.