A few years ago in Uganda the future of the white rhinos was rather bilk but thanks to the zziwa rhino sanctuary our children and grandchildren can now have a chance to see them too. 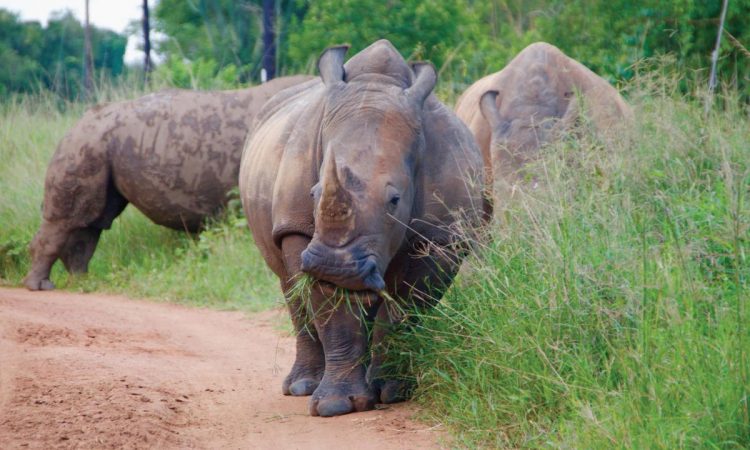 On our way to the magnificent Murchison falls national park we decide to have a break at this sanctuary which is the only place in Uganda where you can catch the white rhinos. Located about 180kms north of Kampala the sanctuary is dedicated to the re introduction of the once extincting white rhinos in Uganda.

The route to the sanctuary is quite well marked with sculptures of the rhino greeting you as you fast approach it. After a quick registration and security check the gates were opened for us continuing to the head offices. We were taken through a brief on what to expect, the dos and don’ts as well as the safety precautions. It was not long before an eloquent gentleman clad in a nature blended uniform and gumboots with a safely belted walkie talkie led us on what would our interesting adventure in the sanctuary. Trekking is done on foot with a guide, a few minutes in to the Savannah walk with a couple of interesting stories from the guide we met the first rhino grazing with a baby

Once upon a time the both the white and black rhinos existed in the verdant parks of Uganda alongside the other members of the big five. Unfortunately, during the political mutiny in the 1970’s and 80’s, the numbers dwindled due to rampant poaching which led to their near extinction in the country’s parks. 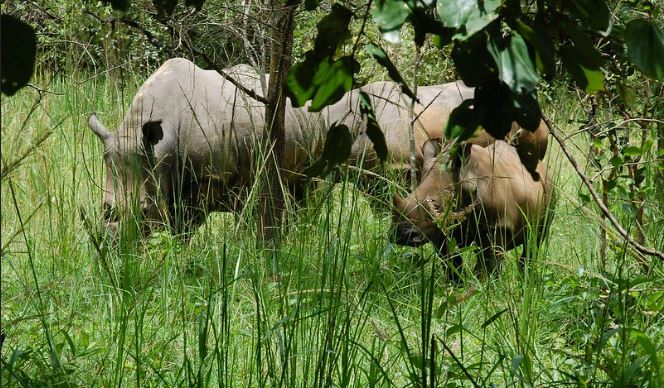 In 1997 a non government organization rhino Uganda was born for the purpose leasing rhinos a new life in Uganda after its last sighting in 1983.

In 2000, two rhinos; Kibira and Sherino were brought from Solio Ranch in Kenya to Uganda Wildlife Education Centre the then Zoo.
They were later transferred to Zziwa after the organization acquired land there in 2004

The sanctuary opened its doors to its first rhinos in 2005, two males and two females from neighboring Kenya.  Later in 2006 the Orlando zoo in Florida gave two rhinos to the sanctuary which together with the Kenyan natives produced the first calf in June 2009 who was named Obama in respect of the American President born of an American mother and Kenyan father like this baby.

Rhinos are very territorial and this was proved when our guide narrated to us the story of on adult male at Zziwa that killed a four year old over a territorial dispute dropping the number to 19.

Each tracking permit for these Rhinos is $45 for foreign residents and 30,000/- for East Africa residents. There are other activities that you can enjoy in this sanctuary for example bird watching, canoe ride, volunteering programs, fishing and nature walks.

The Endangered Rhino
A fully developed, well grown up male Rhino weighs (3000kgs) – that is three tones and (2,800kgs) – 2.8 tones for a female. A baby rhino weights 450kgs at birth. The Rhinoceros comes nest to the Elephant as the second largest land mammal with the Elephant weighing 7,000 kilograms. Female rhinos give birth to 10 and 12 babies in their life span and start producing at 4 years. The rhinos have a lifespan of 45 years on average. On the other hand, males become sexually active at 10 years. They take longer because they need time to priorities on how to man their territories. Rhinos at Zziwa sanctuary and everywhere else move in a group (crash) of twos or threes; one mother and one calf. When a mother gives birth, the old calf is expected to leave.