Nyungwe National Park is located in the south western part of Rwanda bordering Burundi, Lake Kivu and the Democratic Republic of Congo. The park was established in 2004 so as to increase tourism in Rwanda. Nyungwe national park is one of the largest natural rain forests in East Africa covering a total land area of about 1000 square kilometers with an elevation of 160metres to 2950 meters above the sea level. The forest is comprised of the montane rainforest, swamps, grassland, and bamboo and therefore receives over 2000mm of rain each year. 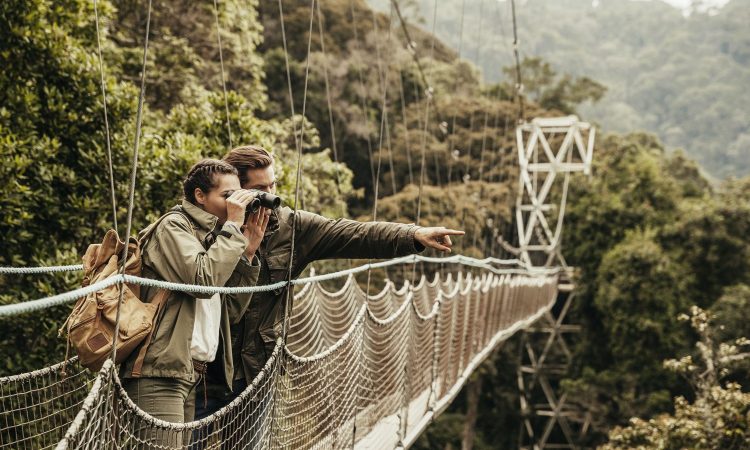 This national park is a home of 75 mammal species, 13 primate species including the chimpanzees, golden monkeys, black and white colobus monkeys among others, over 300 bird species, 120 butterflies, 15 reptile species, 12 amphibian species, 1068 plant species, 140 orchids. Nyungwe is a rain forest that leads to the formation of rainfall which feeds River Nile with its source in Uganda hence acting as a water catchment area in Rwanda. The park is a great destination that offers beautiful views of the Virunga ranges, Lake Kivu which is Rwanda’s largest lake, hills, Isumo waterfall, tea plantations which are found on the park edges among others.

Chimpanzee trekking allows a maximum of 8 people to trek each habituated gorilla family and during the one hour, the visitors will be learning about their behaviors, habits, watch them playing up in the trees, breastfeeding, feeding, mating as you take plenty of photos among others which gives you the best experience on your safari. During chimpanzee trekking you will also be able to view other primates like l’hoest monkeys, Rwenzori colobus, black and white colobus, grey-cheeked mangabeys, vervet monkeys, baboons among others.

Bigugu trail, this is a 7kilometer trail that goes up to the highest point in Nyungwe forest national park which is Bigugu peak that is 2950meters high. Bigugu trail is one of the difficult trails that needs the hiker to be physically fit and takes 6 hours to be completed. During Bigugu trail hiking you will be able to view different bird species and wildflowers in the forest.

Isumo waterfall trail, this is a 10.6-kilometer long trail that passes through the tea plantations, Nyungwe forest, tree ferns among others. Isumo waterfall trail takes about 4 hours to be completed and during hiking, you will be able to view monkeys, tree species and different bird species.

Ngabwe trail, Ngabwe is a short trail that is 4.7 kilometers long. This trail takes you through the vegetation zones in the forest and you will be able to view primate-like colobus monkeys, chimpanzees, l’hoest monkeys among others.

Karamba trail, this is a 4kilometres long trail and is one of the easiest trails in Nyungwe forest national park. While hiking Karamba trail you will pass through flat and open areas in the forest. Karamba trail was once an area where gold mining was done and later the place was made a quarry for road building materials and it’s now an army camp. This trail is good for birding in that you will be able to view different bird species, tree ferns, orchids, monkeys among others hence giving you the best experience on your safari in Nyungwe forest national park.

Canopy walk: The canopy walkway offers you an opportunity to explore Nyungwe forest. Canopy walkway in Nyungwe is a 50 meters high steel bridge that is built on the treetops and it’s the largest of its kind in East Africa. Nyungwe canopy walk has trails where each trail is named according to the type of tree species found there, for example, Igishigishigi trail which means fern trees, also known as one of the main hiking trails in Nyungwe forest national park, Umuyove trail which means mahogany trees, Umugote trail, Karamba trail, Isumo trail among others. The canopy walkway is divided into three walking sections where the longest stretch is 90 meters, another one 45 meters stretch and the shortest at 25 meters. Nyungwe forest canopy walkway starts from the Visitors Centre in Uwinka, takes about 2 hours and offers viewing points along the walkways where you will have great scenic views of the forest, primates, birds among others. The canopy walkway is a thrilling adventure for adventurous visitors and it also made Rwanda be one of the top tourism destinations in Africa.

Gisakura tea plantation tour: is an exciting activity where you will visit the Gisakura tea estate which is located at the edge of Nyungwe forest national park.  A tour at Gisakura tea estate can be combined with other activities, therefore, it can be done like in the evening and you will be able to walk in the tea plantations, visit the processing plants where you will learn how tea is grown, harvested, processed up to the final stage when its ready for drinking. During your tea plantation tour at Gisakura, you will engage in the activity of picking tea into the baskets which gives you extraordinary experiences on your safari in Rwanda.

Nyungwe forest national park is located in the southern part of Rwanda and can be visited anytime throughout the year though the best time to visit is during the dry season which is also known as the peak season in the months of June, July, August, September, December, January, and February. During the dry month, the Nyungwe forest receives less rainfall, therefore, all the safari activities will be successful such as money trekking, chimpanzee trekking, nature walk among others because the trails will be passable though due to the fact that it’s a rainforest it might rain anytime. Nyungwe forest national park can, however, be visited during the rainy season in the months of March to May and October to November. Though it will be a rainy season with heavy rainfall in the forest all the park activities will still continue and the rainy season is ideal for bird watching in that there will be plenty of fruits and food for the birds.

How to get to Nyungwe Forest National Park

Road transport, when using road transport means you will either use a company car or hire a private car which will pick you from Kigali international airport and transfer you to Nyungwe forest national park. There are also public means of transport where you will board a bus from Nyabugogo bus station Kigali and get out of the Uwinka center and hire a private car to the park headquarters.

Nyungwe forest national park is a must-visit destination in Rwanda that offers interesting activities like chimpanzee trekking, canopy walk, nature walk among others hence giving you exciting and breathtaking experiences on your Rwanda Safari Tour.