Volcanoes National Park is the oldest national park in Africa in that it was gazetted in 1925 mainly to protect and conserve the endangered mountain gorillas. The park is also known as Parc National Des Volcans in French and its located in Kinigi a small village called Musanze which was previously known as Ruhengeri northwestern part of Rwanda. Volcanoes park Rwanda is part of the great Virunga Conservation Area bordering Virunga national park in the Democratic Republic of Congo and Mgahinga gorilla national park in Uganda. Volcanoes park covers a total area of 160 kilometers squared and is known for various biodiversity including the five volcanic mountains out of the nine Virunga mountains, vegetation types, endangered mountain gorillas, golden monkeys, animal species like elephants, buffaloes, bushbucks, giant forest hogs, bird species among others. 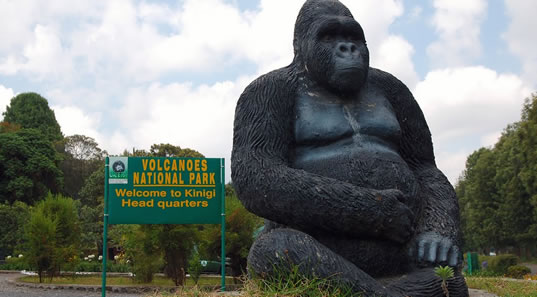 The park is a home of over 15 habituated gorilla families where one family called Hirwa migrated to Mgahinga national park in Uganda in October 2019 leaving them 14 Gorilla groups. Gorilla trekking in Volcanoes national park allows a maximum of 8 people to trek each habituated gorilla family and once found visitors are slowed to spend one hour with the gorillas learning more about their behaviors, habitat, taking photos among others which gives them extraordinary gorilla trekking experiences on their safari.

Bird watching: Volcanoes national park is also a birders paradise in that it harbors over 300 bird species with about 16 bird species endemic to the Albertine Rift. Bird watching in volcanoes national park starts in the morning with a briefing and together with a birding guide and together with a birding guide you will move into the jungle in spot different bird species including red-faced woodland warbler, handsome francolin, Rwenzori turaco, Rwenzori Batis, strange weaver, dusky crimson wing, Rwenzori double collared sunbird, collared Apalis, archer’s ground robin, paradise flycatcher, long-crested eagle, African marsh harrier, common moorhen, white tailed blue flycatcher among others.

Mountain Climbing: Volcanoes national park is a home of 5 volcanic mountains out of the 8 Virunga Mountains and they include Mount Bisoke, Mount Sabyinyo, Mount Karisimbi, Mount Gahinga, and mount Muhabura.

Cultural encounter: During the cultural encounter you will visit Ibyi’wacu cultural group which is found outside Volcanoes national park in Musanze village. Ibyi’wacu cultural village offers community walks to the visitors where they will engage in various activities like making beer from bananas, learning how to prepare local dishes, learn hunting skills, weaving mats, visit the traditional homesteads, cultural dances among others. The group offers performances and entertainments to the visitors in the form of dances, drama, music, storytelling among others. You will also be able to visit the king’s palace where you will see how the ancient kings ruled, visit traditional healers who used to heal different diseases using herbs, visit Batwa the pygmies who used to live in the forest before it was gazetted as a national park among others. The Ibyi’wacu cultural tour will help you to learn more about Rwanda cultures hence giving you interesting experience on your safari in volcanoes national park.

Volcanoes national park can be visited anytime throughout the year though the best time to visit is during the dry season in the months of June to September and December to February. The dry season is also known as the peak season and during this time Volcanoes national park receives less rainfall which makes many activities successful such as gorilla trekking, golden monkey trekking, and mountain climbing because of the trail passable and not is muddy and slippery like during the wet/rainy season. The wet season is also known as the low season in the months of March to May and October to November when the forest receives heavy rainfall which makes trekking difficult. However, the wet season is an ideal season for bird watching in the park because there will be plenty of fruits and food for the birds, therefore, the bird lovers will be able to view different bird species plus the migratory birds.

How to get to Volcanoes National park

Volcanoes national park is located in the northwestern part of Rwanda and can be accessed by road and air transport means.

Volcanoes national park is the most visited national park in Rwanda due to the exciting attractions like the mountain gorillas, golden monkeys among others which give visitors breathtaking and unforgettable experiences while on a Rwanda Safari Tour.