Lake Mburo is located in the western region of Uganda east of Mbarara (between Masaka and Mbarara) and is the smallest national park in Uganda. It is situated in Mbarara district 240 kilometers from Kampala City a 3 and a half-hour drive covering 260 square kilometers at the altitude variation of 1220 meters and 1828 meters with Mbarara city as the nearest town in the region. 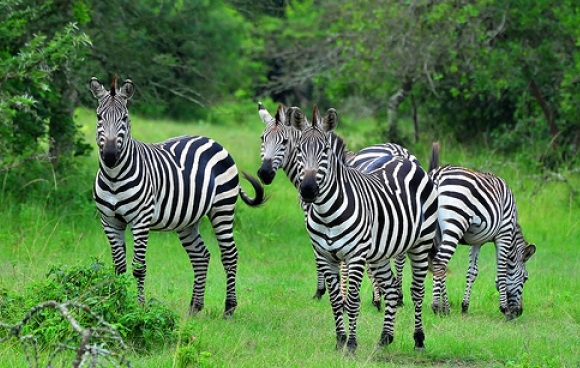 Lake Mburo national park under the administration of Uganda wildlife authority was first gazetted in 1933 as a controlled hunting area and in 1963 it was upgraded to a game reserve, under the regime of Obote the then president of Uganda. It was declared a national park in 1983. Lake Mburo national park is an amazing safari destination comprised of 5 lakes with a beautifully curved landscape, rolling hills and 20 % of the park covered by a seasonal and permanent wetland. Lake Mburo national park is currently covered by savannah woodland because it harbors no elephants to feed on it, and the western region’s savannah vegetation is mixed with rocky ridges, wooded savanna forests, patches of papyrus swamp and narrow bands of lush riparian woodland around the lakes. The park is also covered with thicket bushes, rocky outcrops, and various plants and acacia savannah.

Lake Mburo national park is one of a kind national park in Uganda as it is the only place in Uganda where you can spot impalas. It is also home to other many mammals which you can enjoy including zebra, elands, buffalo, Oribi, Defassa waterbuck, warthog, African leopard, hyena, topi and reedbuck. There are also water animals that are crocodiles, hippopotamus and secretive papyrus animals including Sitatunga, antelopes, black and yellow papyrus ganalex, since 2005 the park is considered a lion conservation unit. Lake Mburo is also a home to over 313 bird species which include rare white-winged warbler, emerald spotted wood dove, crested francolin, brown parrot, the common Francolin, Nubian woodpecker (African grey hornbill), coqui francolin, African wattled lover, Rufous-naped, yellow-throated longclaw and southern red bishop which are a great deal for bird lovers.

Lake Mburo lies in the rain shadow between Lake Victoria and Rwenzori mountains has an old tale from an Ankole myth which lights that two brothers Kigarama and Mburo live in a big valley as a home, One night kigarama had a scarily dream and cautioned his brother to leave the valley which Mburo ignored kigarama decided to leave to the hills leaving Mburo in valley. Unfortunately, the valley flooded with water which formed a lake drowning Mburo. Because of this tale the lake is named Lake Mburo and the nearby hills are called kigarama after these two brothers. The same area is also related to the cassia tree that has powerful aphrodisiac effect, this tree can be seen at around kigambira loop crossroad and is still used by the locals for herbs (branches and bark). The five lakes in Mburo national park has 6 fish species including tilapia, lungfish, mudfish, haplochromes which are fun for fishing games to tourists and some of the swamps include Mirit and Warukiri.

Lake Mburo National Park’s wildlife species are diverse and it offers a lot of fun-filled activities that are extremely exciting to tourists which include.

Game drives: Lake Mburo has no elephants making it good for game drive safaris. While on game drives you get a chance to spot Zebras, Buffalos, Impalas, Warthogs and Waterbucks, giraffes and the shy elands who live in herds while enjoying the beautiful landscape, wetlands in the valleys and shores of the lakes. Night game drives which are conducted with help of spotlights are also available which start between 6:30 pm – 7:00 pm and it is a great chance to watch nocturnal animals like bushbabies, potto and at times leopards. On these game drives, you also get to view Burchell Zebras which are only found in this area in Africa while enjoying the rolling hills.

Salt licking: salt licking spot is the best place in Lake Mburo national park where tourists get to see animals like antelopes, zebras, eland as they come to lick the salt. For better viewing of animals by the tourists the Uganda wildlife authority constructed wooden platform hideaway where the tourists can stand and then see the animals around.

Horseback riding: horseback riding is the most exciting activity in Lake Mburo which attracts millions of tourists in the destination. Lake Mburo allows tourists to tour allowed the park riding on the horse’s back to hilltops. Horseback riding tours are arranged by Mihingo lodge. Horse riding expedition takes 2 to 5 hours’ drive as you by pass giraffes, leopards, impalas as they are grazing, this activity was started in 2008 and it is operated by Mihingo Lodges.

Igongo cultural center: Igongo cultural center a historical showplace for the Banyakitara people (Banyankole, Bakiga, Batooro, and Banyoro) who were the first inhabitants of the western region. It is an important part of a trip to Lake Mburo national park located just 4 kilometers from Sanga Gate, the main entrance to the park. The cultural center showcases the culture of the native people through various grass-thatched huts, it also has a museum where tourists get to learn more about the life of the local people and their culture.

Fishing games: fishing games in Lake Mburo are an amazing activity where tourist get to catch six species of fish with tilapia as the most prominent, the designated spot in Lake Mburo best for fishing is at mazinga, for fishing expedition permits are obtained from Uganda wildlife authority and tourists carry their own fishing equipment.

Hiking and nature walks: nature walks and hiking in Lake Mburo national park take tourists through the beautiful serenity of the park accompanied by a ranger which leads to salt rocks where animals gather to lick salt. On the hike which starts 7 am in the morning takes two hours where you notice different animals and birds as you walk through the hills where you get to view 9 lakes out of 14 lakes of the region. Hikes and nature walk prominently take place in rubaga forest which is home to many birds.

Visit the equator: while on your way from Kampala to visiting Lake Mburo national park who can make a stopover and visit the equator. Most tourists love talking pictures on this landmark, tourists can also tour around and buy an ornament from souvenir shops.

Bicycle safaris. Bicycle safaris are also one of the fun activities of exploring the wilderness of the park, bicycling safaris are operated by Rwakobo since 2013, it a healthy way of touring as it involves no use of cars with polluting the environment with fumes. These are conducted by the guides according to the needs of the tourist, they last for one hour and more.

Cultural encounters: Lake Mburo is a home to 13 communities living around the park, a lot of cultures is showcased around the park which is an exciting experience to tourists, Uganda wildlife authority in cooperation with Uganda Community Tourism Association (UCOTA) organized the locals into 9 entrepreneurial groups composed of 294 members responsible for showcasing the culture i.e.