Mgahinga Gorilla National park is a well known park for gorilla safaris. The park lies on the northern slopes of Mts. Muhabura, Mgahinga and Sabyinyo, the three volcanoes that create an unforgettable regional backdrop. These peaks are three of the six Virunga volcanoeas that mark the southern limit of the Albertine Rift Valley and are divided between Uganda, Rwanda and DR Congo. The Virungas are home to more than half of the world’s population of the endangered mountain gorilla. 380 individuals roam the slopes of the volcanoes while the remaining 340 live nearby in Uganda’s Bwindi Impenetrable National Park. Fortunately for the gorillas, Mgahinga’s small area is supplemented by those of two larger, adjoining parks in Rwanda (Volcanoes NP) and DR Congo (Virunga NP). 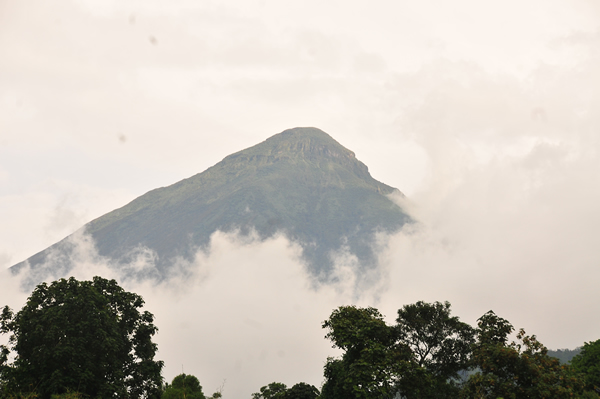 Though gorilla tracking is the park’s most popular activity, Mgahinga merits a visit simply to appreciate the scenery. A choice of hikes allows for all abilities, ranging from the 8 hour return trip to the summit of Mt. Muhabura, to gentle strolls across the lower slopes beneath the magnificent three peak backdrop. The park experiences two rainy seasons; March-May and September-November. October is the wettest month, with 250mm of rain and July the driest with just 10mm.

Mgahinga’s slopes are covered with a series of distinct altitudinal bands of vegetation. The lowest zone is an area of grass and bush which was formerly encroached and cleared by farmers and is now regenerating. Undisturbed vegetation starts with montane woodland, followed by the bamboo zone, montane forest and the Ericaceous zone which contains giant tree heathers. The sequence culminates with the spectacular alpine zone which occurs only on East African Mountains above 3000m and includes bizarre giant forms of lobelia and groundsel. 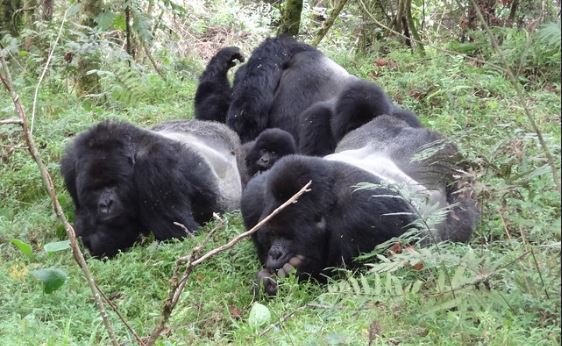 The park contains at least 39 species of mammal and 79 birds. Larger mammals include elephant, leopard, buffalo and bush pig but these are rarely seen. Mgahinga’s most famous resident is the mountain gorilla. Less famous but equally rare and deserving of protection is the golden monkey which is found only in the Virungas and in one other forest in Rwanda. Notable bird species include the Rwenzori turaco, crowned hornbill, black kite and crowned crane.

The Local Community of Batwa.

Kisoro District is heavily populated with 331 people/ km2. There are two main ethnic groups. The most numerous are the Bafumbira who are primarily farmers. The Batwa, who once practiced a subsistence hunter-gather life in the forest, form a minority group.

Gorilla Tracking: Mgahinga’s most exciting and memorable activity is tracking the mountain gorilla in thick jungle. The park has one habituated gorilla group (Nyakagyezi) which is visited by tourists. This consists of 11 members; 2 silverbacks, 3 adult females, 4 juveniles and 2 infants. This group is mobile and sometimes crosses into Rwanda and DRC, so check for updates from Uganda Wildlife Authority (see contacts). Registration and briefing for gorilla tracking commences at Ntebeko at 07.45. Tracking starts at 08.30 and can take three to eight hours.

The peaks Mgahinga has three volcanic peaks, Muhubura(4127m), Sabyinyo (3669m) and Mgahinga (3474m). These can all be climbed. Though no specialist equipment is required, a reasonable level of fitness is necessary if you intend to enjoy the experience.

Like an old man, time has eroded Mt. Sabyinyo’s crown. This volcano offers 3 challenging peaks to climb. A climb up the mountain takes one up a ridge along the eastern side of the climb to peak. If you are to continue, the climb to the peak 11 involves walking a ridge with breath-taking drops into gorges of Rwanda and Uganda, a dual experience you will achieve here.
Finally, the hike up to the peak 111 is steep with several ladders and mush scrambling. You are guaranteed to get your hands dirty en-route to peak! Once on top, you will be in Rwanda, Democratic Republic of Congo and Uganda, what a triple experience this is!!! The journey takes about eight hours round trip to cover the 14km stretch

Mt. Gahinga (3474m)
On your way to the park, look out for small piles of stones in the garden fields. The local people call such a pile a ‘Gahinga’.

Mount Gahinga is quite bigger than the average ‘gahinga’ but sitting next to Mount Muhavura does make it look small. A hike, which takes you about, six hours round trip, goes through a good example of a pure Bamboo forest. Gahinga once had a Crater Lake on top but time has changed it into a Lush swamp. Distance to the swamp is 8km.

Seen from all over Kisoro, this volcano acts as a guide. The typical cone-shaped Mountain provides some of the best views in the country. Much of the climb passes a rocky surface covered by grasses and small shrubs. Once at the top, hikers are rewarded with the view of the Virunga volcanoes, Lake Edward in queen Elizabeth National Park, Bwindi and the peaks of Rwenzori Mountain. The hike takes approximately 8 hours round trip covering 12km.You are advised to camp at the Muhuvura base camp the night before the site has no facilities so you need a tent, water, food and

The Batwa Trail leads from the base of Muhuvura Cave. This walk is conducted by Batwa guides VI insights into their traditional forest life and culture. The 342m long Garama Cave lies beneath a plate northern edge of the park, 3km from Ntebeko. It i~ former farmland zone but in earlier times, the cave forest when it was occupied periodically by Batwa as a council chamber and a retreat after raiding their neighbours 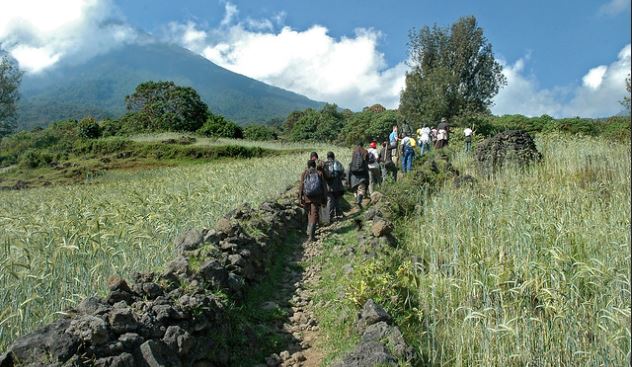 Where to spend Overnight/Accommodation facilities.

For those that are much interested in camping, ample space is available at the park gate and Mt. Gahinga Rest Camp for ‘Do it Yourself Camping’, besides that, there is also excellent traditional Bandas managed by the local community.

How to reach Mgahinga

Kisoro is about 540 km from Kampala (Uganda’s capital city), it takes about 8 hours via Kabale by car. For public transport, there are daily buses/minibuses, which set off at 7.00pm from Kampala.