Ziwa Rhino Sanctuary is a savior to the last rhinos standing in Uganda and it is a nonprofit project of bringing back the rhinos to Ugandan national parks. The rhinos in Uganda had got extinct due to excessive poaching for their ivory and skin after the black rhinos got depleted from Uganda in Murchison falls national park and Kidepo national park. During the massive political wars in the 1970s together with the rampant poaching in the 90s, they can only be found in this special place called ziwa. Ziwa is a proud home for the unique rhinos; the only place you can find the rhinos in Uganda. 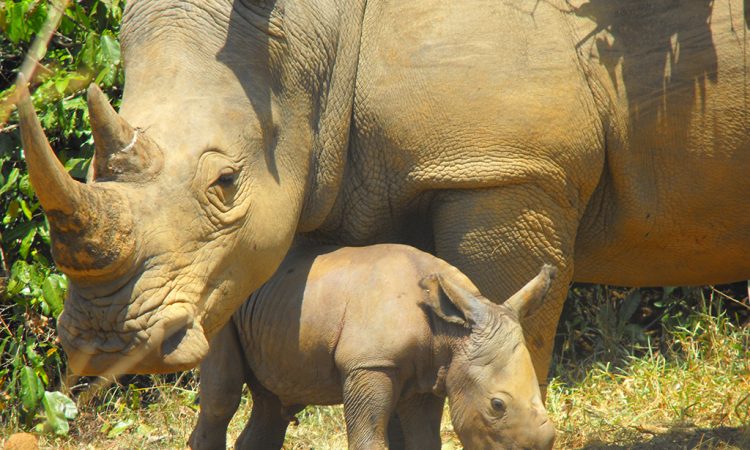 The rhino sanctuary was put up after the collaboration of the Uganda wildlife authority, the rhino fund uganda and ziwa ranchers limited which is a private real estate management company. Ziwa has proved, over a period of time, to be the safest place away from human interference and other wild predators, so that the rhinos can breed and multiply, until when they will be reintroduced into the national parks of Uganda.

The place is massively secured by a large team of committed rangers about 78 and security guards. The premises of ziwa rhino sanctuary are strictly protected all through the 24 hours for safety reasons.  The area, about 70sq.km, of ziwa rhino sanctuary is all engulfed with a 2 meter electrified fence to avoid he intruders and also to keep the rhinos in place.

Besides the rhinos, ziwa is a home a lot of other animals about 40 mammals and reptile species, for example, the forested areas of the sanctuary are nests for monkeys and numerous bird species. You can also spot antelopes, hippo at ziwa during the game drive.

Ziwa rhino sanctuary is supplied with tourist facilities such as safari lodges, guest houses, budget accommodation and camping grounds among others. The accommodation facilities are separate businesses from the sanctuary project. However, they are found on the premises of ziwa.

The institution of ziwa rhino sanctuary was a thought of the rhino conservationists after the witness of the extinction of all rhinos all over Uganda. This happened after the political wars that raged through Uganda in the 1970s, especially the wars in northern Uganda resulted into the massive massacre of the wild animals in the national parks such as kidepo and Murchison falls national park. However, poachers who hunted the rhinos for ivory propelled the speed of rhino extinction from the entire country.

ziwa rhino sanctuary was found and formed in 2005, this act of the great conservationists, marked a clear way for the reintroduction of the white rhinos into the national parks of Uganda. Ziwa rhino sanctuary project, originally, was an initiate by the rhino fund of Uganda, which is also the sole responsible firm for the introduction of the white rhinos back in Uganda. The long term goal of the establishment of the rhino sanctuary was to build a sustainable rhino population and to relocate rhinos to the natural setting in national parks.

The goal of ziwa rhino sanctuary is being leaved and the progress is visible when you visit to the premises. Initially, the rhino project at ziwa rhino sanctuary was started with just six (6) rhinos; four rhinos were imported from solio ranch in Kenya and the other two were just donated to the rhino project from the Disney’s animal kingdom which is found in Orlando Florida in the United States.

The most done activity in ziwa rhino sanctuary is rhino trekking within the premises of the sanctuary. Rhino trekking is a real-life opportunity to see the rhinos in a natural setting at an up-close view. You can trek the rhinos is in ziwa on foot and you can see the rhinos at a closer look, plus take some close and clear photos of the only rhinos in Uganda.

Rhino trekking in ziwa sanctuary is led by the rangers of the sanctuary who are well familiar to the rhinos and they can teach you all about the different rhino behaviors. The rhino trekking activity is also an opportunity for you to see all the other mammals and a variety of uncountable biodiversity.

Bird watching is another interesting activity which you can do when you visit ziwa sanctuary. The sanctuary is a favourite place for a number of birds over 200. The birds in ziwa are interesting to watch, for example the sought after shoe bill stork. Other birds include the woodpeckers, kingfishers, turacos, among others. Birding can be done by taking a nature walk, guided nature walk for half or full day.

The nature walks in the rhino sanctuary are led by a guide from the office or park headquarters. The nature walks in ziwa rhino sanctuary offer you a chance to see a lot of animals such as the hartebeests, bushbucks, monkeys such as the black and white monkeys, the blue colobus monkeys, reptiles like lizards and snakes and a lot of insects such as butterflies among other creatures that make up the biodiversity of ziwa sanctuary.

Amuka Lodge is one of the accommodation facilities found within ziwa. Amuka Lodge provides amenities such as a swimming pool, standard room services, a restaurant and other facilities to make your stay a memorable one. There are also camping grounds located close to ziwa sanctuary headquarters and provide an ideal option for an epic African safari.